Counting Down With You, by Tashie Bhuiyan 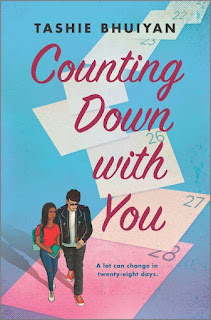 Karina does what she can to make her parents proud.  She works hard in school.  She follows her parent's strict rules (5PM curfew, no boys, etc.) but she wishes that they would support her love of literature.  Instead, they push her to study medicine and are forcing her to focus on STEM classes even though she loves English more.  It's driving her literally crazy as she battles with anxiety trying to maintain the façade of being a perfect daughter.

When her parents leave to go on a month-long trip to Bangladesh to see the family, it's a breath of fresh air.  Her beloved grandmother comes to look after Karina and her younger brother Samir, but grandma is far less judgmental.  This is just as well because of what is about to unfold in Karina's life during the next four weeks.

Karina's English teacher asks her to help out by tutoring Ace Clyde, a young man without a care for his studies and a bad reputation.  Karina's parents would be scandalized (even though Karina and Ace are meeting in public) but since they are away Karina feels she can get away with it.  What she isn't prepared for is when he starts telling people that they are dating and he talks her into going along with the ruse.  Where this is going to go in four weeks when Karina's parents come back can't be anywhere good, especially when the ruse becomes reality and Karina and Ace develop real feelings for each other.

This is a rather painful plotline to set up an awkward romance with a big heavy shadow over it.  To mess it up further, it is a story that isn't really sure on what parts it wants to focus.  In the end, Bhuiyan wisely stresses Karina's longing to pursue her future career (rather than worrying about the boy) but the boy is never too far away.  It ends on an inconclusive and ambiguous note (although there's a lovely author's note at the start that partially makes up for the ending).

It also doesn't help that the characters are weak. The parents are horrid and never quite redeemed in the end, which undercuts Karina's motivations.  Karina's love for her parents is never really shown and feels more like an obligation than anything real (in striking contrast to her love of literature).  Karina is largely embarrassed and dismissive of her extended family of Aunties and Uncles.  Only the grandmother -- who steals the show overall -- ever really shows warmth and love.  This problem is repeated with the other characters:  Ace is more manipulative than caring, Karina's BFFs are well-meaning but hapless, and her brother weak and ineffectual.  Even Karina seems weak and non-inspirational -- she largely lacks agency, failing in the end to be the one who really solves her problems.

It's a fast read and entertaining.  It's lovely to see Bangladeshi-Americans represented.  Overall, the story is respectful of Islam and portrays a young woman with a strong commitment to her faith.