Me (Moth), by Amber McBride 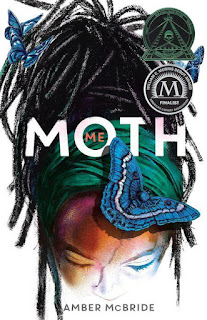 Ostensibly a road trip story told in verse, Me (Moth) is a complex tale  tackling grief, depression, and suicide (with a few quick shots on racial injustice along the way).

Moth was in an accident that "split" the family car in half: leaving mother, father, and grandfather all dead.  Moth went to stay with her aunt, who ignores her and instead drowns herself in the bottle.  Moth is similarly ignored at school and left to fight off her grief and survivor's guilt on her own.

Sani, a new kid at school, untouched by the stigma of Moth's past, reaches out to her and they find they have a lot in common.  Sani is half-Navajo and has a strong attachment to the spiritual beliefs of his people, while Moth's grandfather was a follower of Hoodoo (a traditional spiritual practice among Black Americans).  Moth's grief is familiar to Sani because he takes anti-depressive meds to deal with the "waterfall" in his mind.  Moth's neglect seems idyllic to Sani who faces abuse from his stepfather.  Finally, on top of it all, they are both artists, reluctant and afraid to follow their dreams.

With a sense that there is nothing left for them at home, they decide to run away on a cross-country trip to the Navajo nation.  Along the way they draft up a "Summer Song" that encapsulates many of the ideas of the story, visit a number of landmarks, and explore their feelings towards each other and themselves.  A unexpected (but well foreshadowed) turn of events in New Mexico, however, forces Moth and Sani to acknowledge certain realities that they have been avoiding and generates an ending with startling pathos.

As I never tire of stating, verse either works or it doesn't.  There are no "okay" verse books and most of them are excruciating.  This is one of those brilliant exceptions.  McBride's writing is deep and complex, like for example when she has Moth describe her feelings for Sani ("Honey, you can keep me forever,/like a phantom limb").  But more often her writing defies soundbites and easy explanation.  It can be slow reading, but that is because there are a lot of nuances to take in.  Surprisingly, this is not a character-driven story -- we barely get to know either of the characters even though they are constantly talking.  Instead, this is a more moody exploration of generalized concepts: what it means to lose someone, what is our relationship with our ancestors, and what it means to accept death.  Heavy thoughts, beautiful words.