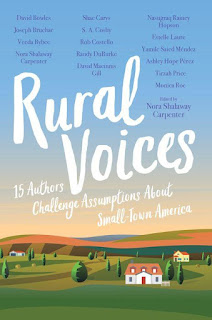 One of my standing pet peeves about contemporary fiction is its strong urban and suburban bias.  Just as the mass media and popular culture as a whole have largely neglected life outside of metropolitan centers, YA literature rarely ventures into the countryside.  When it does so, it usually is simply to portray rural areas as some hellish landscape that our protagonist is trying to get away from.  Thus, when I saw this collection of short stories, I was terribly excited.  At last!  A group of fresh new writers who would take on the stereotypes and show us the great variety of life in the countryside.

There are a few outstanding pieces like Monica Roe's "The (Unhealthy) Breakfast Club" about poor rural kids doing their homework at the McDonalds in order to pick up decent Internet.  Joseph Bruchac's reminiscences about growing up in the 1950s are by their nature full of depth and nuance.  But for the most part, this collection is the same old same old.  Sensitive intellectual (and usually gender queer) teens who chaff at small town prejudice and ignorance.  It's tired stuff and insulting to its subject.  And it's not terribly realistic.

I would set out a challenge:  create a story about young people who like where they live and don't want to run away to the city.  Teens who by the nature of their socioeconomic status spend a good part of their day doing chores to help their families.  Who get up before the dawn and spend an hour on a school bus working on their homework.  Who see church as a social experience that gives them identity rather than as an enemy of their creativity.  Characters, in sum, who don't hate the culture they come from.  In this anthology, the only time a character seems to like their roots is when they are Latinx or Black or Native American.  That's more political than true to life.

Small town America doesn't have to be the bogeyman.  It's a shame that a collection that claims to challenge assumptions instead chose to reinforce prejudice.