The Pants Project, by Cat Clarke 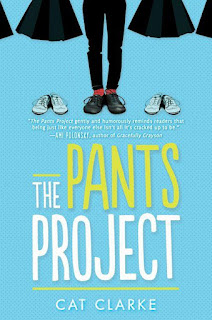 Liv is starting middle school this year.  There will be lots of new things to get used to:  being the youngest instead of the oldest, having new class options, and making new friends.  But the hardest thing for Liv is the new dress code and the rule that all girls must wear skirts.  Liv hates skirts and never wears them.  Boys are always bothering girls by trying to look up them and tights make Liv's legs itch!  But hardest of all, being sorted this way means that Liv not only has to wear a skirt but Liv also has to identify as a girl.  And, even if Liv has told no one else yet, Liv knows that he's a boy.

Coming out as a transsexual isn't something Liv is comfortable with doing yet.  Liv sees the way people look down at his non-traditional family (Liv has two mothers).

For Liv, standing up against the dress code is a smaller battle, something manageable.  After all, even some girls don't like wearing skirts.  So, while Liv works up the courage to come out, Liv can take on the school's rule.  But Liv's not entirely correct.  Fighting for the right to wear what one wants means putting everything on the line, jeopardizing old friendships and finding new allies.

The book is a busy story with lots of subplots, but an overall message of being yourself and resisting peer pressure.  Liv makes a few mistakes along the way, but she demonstrates maturity and generally makes good choices.  While Liv's gender identity is an important issue, Clarke wisely puts the topic in the background and focuses the story's drama on the fight over the dress code.  It's a paper tiger of an issue but that makes it a cleaner target for the middle reader demographic. And it gets the message across effectively.  There is a sense that Liv will prove just as capable at working out who Liv is.