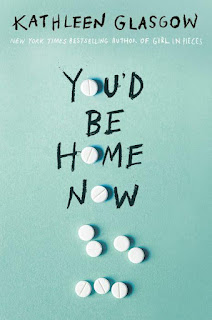 Emory has always tried to be who others told her she was.  She wasn't as beautiful as her older sister, but she was the good one.  That's important after her brother Joey's drug problem came out into the open.  A car accident, in which a girl died and in which both she and her brother were in the car, has scarred the community.  People blame the driver and her brother for being high. Never mind that the accident was caused by bad driving conditions, because people see the drugs and they want to blame the drugs.  And Emory, who was sober, is guilty by being in the car, by being the sister, and by being alive.

Four months later, Joey is let out of rehab and returns home.  Emory is determined to make sure that everything stays fine.  She'll keep an eye on Joey and make sure he's fine and stays off drugs.  Never mind that her parents don't know how to cope with him and ignore her altogether.  Never mind that people at school want him dead for what he "did" to that dead girl.  It's all going to be fine.  That is, until Joey disappears.

A non-stop drama that builds up gradually and keeps your attention to the end.  It starts as a simple tale of identity about Emory's search for self and could have stayed in that realm and been successful.  There's a lovely minor character named Liza who steals the show by channeling all that good advice stuff about standing up for yourself and not taking crap from bullies that you wish every YA novel would have.  In a book about identity, she would have saved Emory and they would have lived happily ever after.

But the novel isn't really about standing up to bullies, it's about opioid addiction and the way it is destroying communities.  Emory's search for self isn't about facing off against a petty queen bee, it's about finding the inner strength to be the person her addict brother needs her to be.  As these things are a group effort, it's also about pulling her parents along with her and having the entire family come together to save Joey.  It's a harrowing, intense, and authentic look at a family struggling to deal with addiction.  Well-written and thought provoking.