A Wizard's Guide to Defensive Baking, by T. Kingfisher 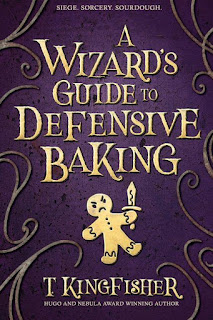 Mona's magic isn't big and spectacular.  Her skill is manipulating bread:  she can make dough do what she asks it to do and she has a very special relationship with Bob, her sourdough starter.  All that would be more than enough for a shy fourteenth year-old orphan and apprentice baker.

However, when she discovers a dead body in her bakery and subsequently crosses paths with Inquisitor Oberon, she finds herself plunged into the middle of a conspiracy against her beloved city.  Someone is killing off the town's wizards and magicians and she is targeted.  With help from a street urchin named Spindle and her aunt, she convinces the Duchess that they need to strike back. However, by this point she is the only remaining wizard and must call upon her powers (and creativity) to defend the city...with baked goods.

A witty fantasy tale with a playful nudge-and-a-wink to the genre.  The author struggled for many years with the manuscript and it has many rough edges.  Bob, the sourdough starter, steals the show and probably is one of the more original monsters ever created.  However, by the end, the witty references to cookery get a bit stale.  Kingfisher also had difficulty getting Mona's voice to be right and that too still unfortunately shows as Mona wavers between young child and mature adult throughout.  All that said, the rough edges of the story add character and overall I enjoyed this celebration of creativity (and of baking in particular).  An enjoyable read.