Called Upon, by Bethany Lee 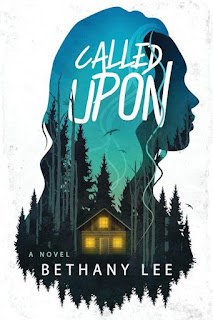 After yet another year of being bullied at school, Kaitlin is looking forward to a summer away from her peers.  So her mother's sudden decision to send her away to some fancy summer camp fills her with dread.  But Kaitlin is pleasantly surprised to overcome her fears of social interaction and to actually make friends in her first week there.

However, the camp itself is strange:  largely unsupervised, the kids are free to roam, but they are painfully aware of the watchful gaze of the creepy security guard and their grey-eyed counselors.  When campers start to disappear, Kaitlin and some of the others start to get suspicious.  And when she falls ill with mysterious symptoms, things turn deadly.  She'll have to draw on strengths hidden inside of her and learn to believe in herself.

Adding to the mystery, the story is also told through the perspective of two other characters (Ashley, an unwed mother of twins, and Parker, a young man with an intense hatred of his father).  Who these people are and how they fit in with the nefarious affairs of this summer camp unfolds only slowly.

While it starts slow and it takes a while to accept the multiple narrators (especially when it becomes clear that Ashley and Parker don't have much to contribute to the story), Lee does an excellent job of building up her mystery.  However, the story becomes less interesting as the implausible truth unfolds.  Once things unravel, the explanation just seems silly.  It probably works as a juvenile thriller, but really fell apart for me.  In the end, I found it entertaining, but not particularly rewarding.