Instructions for Dancing, by Nicola Yoon 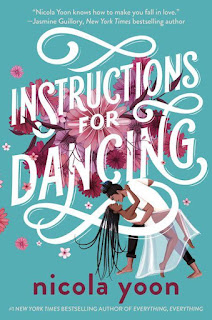 After her father leaves the family for another woman, Evie decides that she's given up on love.  All it seems to do is leave people hurt in the end.  She swears off relationships.  She even drops her favorite romances off at a neighborhood free library.

While doing so, she runs across a mysterious old woman who basically pushes a book called "Instructions for Dancing" into her hands.  And while Evie has no interested in learning to dance, she finds herself heading to a nearby dance studio (whose address is written in the book).  There, still on impulse, she enrolls in a class and meets X who proves to be the perfect dance partner.  After much practice and a lot of getting to know each other, the two of them compete in a local dance contest.

But as happens often in Nicola Yoon's novels, there's a parallel more fantastic story.  After meeting the old woman, Evie starts having visions; foreseeing the future of relationships.  If she sees a couple kiss while they are in love, she can see the course of their relationship all the way until its end.  Needless to say, none of this helps dissuade Evie from her conclusion that all relationships end up badly.  To escape from these visions, she tries to avoid seeing any of her friends together.  And when she and X start developing feelings for each other, Evie is terrified of what she will find if they ever kiss.

The dual storylines are Yoon's trademark and I'm afraid to say that I'm not really a fan of them.  The approach worked in Everything, Everything but proved a burden in The Sun Is Also A Star.  Here, we're more in the latter camp.  Unlike a subplot which would simply divert attention, the two threads here are really co-equal and distracting.  Is this a story about learning to dance (in all of its literal and figurative senses) or is it about grappling with the ability to let go?  It's actually both and while the two ideas overlap and interrelate, there is a competition between them.  At any given time, one of them is being neglected.  The rushed ending (for both threads) doesn't help either.