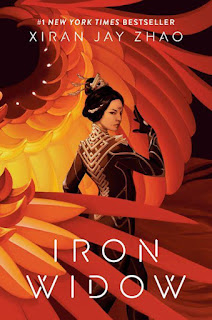 I had no idea how innovative mecha literature could be!  But between War Girls (reviewed in January) and this novel, it would appear that the reign of the dystopian novel has passed.  We can now celebrate the rise of blood thirsty feminist-imbued robo-warfare!  And while Iron Widow looks a lot like War Girls, there are a number of key differences as well, beyond the obvious difference in cultural setting.

Huaxia has long been protected by the Great Wall.  But defending the empire from swarms of alien Hunduns also requires special robotic war craft called Chrysalises.  Run off of the qi of two young pilots, they are capable of mutating into a variety of forms, depending on the level and source of that qi.  Proper operation requires a strict hierarchy: in the more powerful yang seat sits the young male pilot.  Alongside with him, in the yin seat, sits a young woman.  Occasionally, the two co-pilots can balance their qi and become a "perfect match" but far more often the qi of the male overwhelms the female and she is annihilated during combat.  So, while a male pilot can be feted as a hero, female pilots are almost always victims.  Still, despite the near certainty of death, families willingly sacrifice their girl children for the opportunity to bring glory to the family.

For Zetian, there is another motivation for enlistment altogether.  Her older sister was killed by a male pilot and she wants revenge.  When she gets it, murdering her male co-pilot in cold blood, she gains the moniker of "the iron widow." To her surprise, she is not killed, but instead is reassigned to co-pilot with Shimin, a notorious psychopath and the holder of the strongest qi in the empire (rumored to be almost as strong as the great lost emperor himself!).  The presumption is that he will destroy her in combat but that doesn't happen.  Instead, Zetian and Shimin are found to be a perfect match and pitched as the best chance of finally eliminating the Hunduns.  Their survival now depends upon making themselves indispensible and they find themselves in an even more dangerous game of intrigue -- a game that may just undermine the foundations of their civilization (if the Hunduns don't get them first!).

A rollercoaster ride of blood-soaked action, full of twists and turns.  The plotting is sufficiently byzantine to keep me enthralled and always guessing as to what will come next. Zhao's vision (and the logistics of qi combat in particular) are breathtaking.  I won't claim to fully follow the ending of the story, but I did appreciate the true originality of the fight sequences.  The Chinese-esque setting is sweeping and beautiful without falling into twee orientalism.  It is masterful storytelling.

It's all quite dark though so if you don't like your YA dark, bloody, and unrelentingly political, then this is one to pass by.  But by doing so, you are definitely missing one of the best science-fiction YA novels of the past year!