The Girls I've Been, by Tess Sharpe 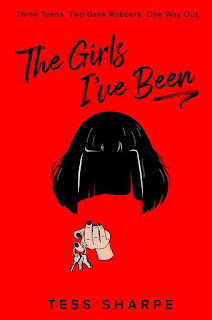 At a fundraiser the day before, Nora's ex Wes found Nora and Iris kissing.  Now, the three of them are having the most awkward moment together in the teller line at the bank, depositing yesterday's receipts and struggling with communicating with each other.  But everything gets pushed aside when two men pull out weapons and announce a bank robbery.  In the end, the surprise is going to be on them:  they don't realize who they've captured.

Nora isn't the sweet girl she pretends to be.  Nora isn't even her real name. She's a con artist and the daughter of a con artist.  But now her mother is in jail and Nora lives with her older sister (also a con artist).  And for the next eighty pages or so, we see how clever Nora is and how easily she can manipulate the bank robbers.

But then the story takes a serious and radical turn.  Nora's life hasn't been all clever manipulation and exploiting stupid people.  There's been a slew of abusers and Nora's talents have been more of a survival mechanism.  Her mother hasn't always been an ally and Nora has had to do some pretty drastic things to get through it.  Through flashbacks, we find out the depths to which she will go and, in the present time, we find that struggle continue to get her and her friends out alive.

I started off really liking Nora's character.  She is resourceful and intuitive, with a good head on her shoulders and full of wit, but as the story drifts into her past I lost a sense of what the story was really about and what the author really wanted to achieve.  By the end, it all just felt exploitative.  I lost interest in the characters who began to seem less and less realistic or even meaningful.  The original story about Wes and Iris?  It's largely buried under the action and the blood/gore.

There's the de rigueur list of abuse resources at the end of the book to imply that Sharpe is making some deep study about a survivor, but we don't really learn anything about abuse here.  If Nora is supposed to be exhibiting survival strategies by stabbing and murdering men, I'm not sure exactly how it will be helpful to anyone.

Apparently, it's coming to Netflix soon.