A Place to Hang the Moon, by Kate Albus 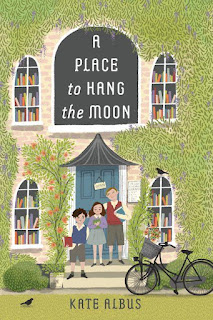 To say that Grandmother took care of William, Edmund, and Anna would be an overstatement because in truth she wanted nothing to do with them.  Officially, she was their guardian after the death of their parents, but it was the housekeeper who did what little passed for parenting for the three children.  Still, things could be much worse and when the Grandmother passes away, the children are faced with the awkward question of who will take care of them?  The last thing they want is to be separated, but with a war with Germany on the horizon, there seems little possibility of an appropriate foster home being found for them.  And at the same time, great discretion is advised as the three children are wealthy and could easily be exploited by some unscrupulous person.

It is their solicitor who lands on the idea of having the children join in the evacuation of London, pretend to leave their parents behind, and settle with a host family in the countryside.  Preposterous as it might sound, perhaps they will uncover a suitable foster home?  A place where, as the children put it, they might find someone who thinks that they "hang the moon."

Reality is much harder of course and the children find themselves shuttled from one unsuitable place to another.  Faced with different types of abuse and neglect, the one bright spot in their lives is a kindly librarian, Mrs. Müller.  The children adore her and she reciprocates, but she cannot host them.  She has been judged an unsuitable guardian due to the questionable loyalty of her husband, a German national who left her and disappeared at the outbreak of the War.

The orphan genre is truly a golden part of children's literature and this one pays homage to the greats.  It's a predictable formula but one that is very effective.  It combines adventure as the children face peril and yet emerge happily in the end in the arms of a loving family.  The emotional pay off is strong.  In this particular case, period detail about the evacuation of children into the countryside gives us some meaty subject matter as well.  The result is an enjoyable and memorable read.  Recommended.