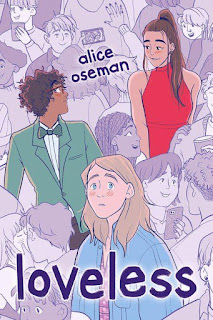 Georgia has never been too worried about her lack of romantic experience until the day she realizes that everyone else has had some.  She's never even kissed a boy, let alone dated one.  And now that she's started her first year at university, its seems like dating and sex are pretty much at the center of everyone's lives...except hers.

It's not like she hasn't thought about it, but whenever she tries to think of someone she'd like to date, it doesn't seem right.  And kissing?  Eww!  And no, she's not gay either -- girls hold no more interest for her than boys.  Friends and family try to reassure her that she'll get there eventually.  Someday, she'll meet her "special someone." But she doesn't believe it.

So, what does that mean?  If she never feels a sexual attraction or a romantic desire, is she destined to end up alone and lonely? Will her friends drift away as they marry off and start families, leaving her to live by herself?  Is there such a thing as love without romance?  Is there life without love?

Oseman's groundbreaking novel of an aro/ace young woman explores the sexual orientations that aren't -- asexuality and aromantic (that's the tail end of the LGBTQIA+ acronym, by the way) .  I have only passing familiarity with the concept (if knowing two ace people in real life counts) so this was all a big education for me.  My jury's still out about my personal feelings about asexuality as an identity, but the fact that Georgia identifies with it is enough for me to be interested in learning more.  This is a fairly painless way to do so.

However, I found the novel a bit of a chore.  Written in a fanfic style that rambles on and on, Loveless is a long soap opera of the first year of college, with lots of bed hopping, too much alcohol, and very little studying.  It comes off like a non-hetero British version of Felicity and can be just as grating.  The writing is in desperate need of an editor and a lot of trimming.  The protagonists break character frequently, when they are not repeating themselves.