Of a Feather, by Dayna Lorentz 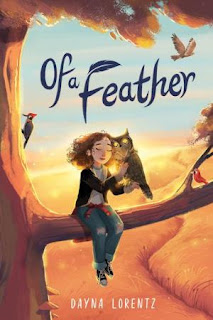 Rufus is a Great Horned Owl who lacks confidence.  He's a poor hunter and still relies on his mother to help him find food.  His older sister enjoys terrorizing him, but honestly he's afraid of everything.  When his mother is injured, Rufus finds himself alone in the woods.  Unable to cope for himself, he is injured and ends up caught in a trap.

Reenie is an eighth grader, uprooted from her home and school, and transplanted with an aunt that she hardly knows. Her mother suffers from depression and keeps falling apart, leaving Reenie in an insecure state.  From her struggles, Reenie has learned that she can't trust anyone and so she never does.  But at her new school, she slowly warms to a boy and a girl in her class and forms friendships.

More importantly, Reenie's aunt is an animal rehabilitation specialist and a falconer.  While initially skeptical of her aunt's activities, Reenie quickly is enchanted by the birds.  Exploiting Reenie's enthusiasm, her aunt enlists her assistance.  Her aunt even helps Reenies try to capture a falcon of her own to train.  But instead of a falcon, they capture an injured Great Horned Owl.

Owls are largely untrainable, her aunt warns her, but this one forms an inexplicable bond with Reenie and the two of them regain their confidence together and learn to reach out again.  However, as with all wild animals, Reenie must learn to let go of Rufus once he has finished his rehabilitation.

A terribly sweet story highlighted by numerous interesting bird facts and some very funny owl dialog.    While the story may be a bit contrived, the message about trust, family, and being brave plays very nicely through both of the story's protagonists. The anthropomorphism is less jarring than one would think as it draws on known owl behavior.  A truly delightful read!