That Thing About Bollywood, by Supriya Kelkar 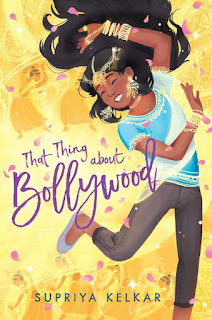 Sonali is upset that her parents are separating.  While it's a bit of a relief since they are always fighting when they are together, she wishes she could talk with someone about it.  Her father, however, doesn't believe that anyone should talk about their problems outside of the family.  And while even Sonali's mother thinks Sonali should be able to tell whoever she wishes, Sonali obeys her father.  Unable to say the things she needs to say, she cuts herself off from her friends, which makes things worse.

The pressure drives her so crazy that an unexpected thing happens:  her life becomes a Bollywood film!  Now, when things get bas, she breaks out into lavish song and dance numbers.  Colors become brighter.  A musical soundtrack starts up.  The people around her become a chorus and background dancers.  In her songs, Sonali finally expresses her real feelings.  She calls it "Bollywooditis," where music, dancing, and a larger-than-life world becomes the only place Sonali can be heard.  But she knows that it is not real and as much as she loves it, she wants things to be normal again.

This magical Disney-esque conceit serves as a loving tribute to Bollywood and all of its camp.  While the story itself is fairly basic and carries no particular surprises, it becomes a vehicle for Kelkar to bring up all of her beloved tropes of  "filmi magic." For a Westerner with limited exposure to Bollywood (I once shared an apartment with a group of Indian students who watched nothing else all summer), I could recognize and appreciate only some of the references, but for true fans there is a lot to enjoy.  Kelkar pulls out all the classic ingredients and creates a story that puts American middle school drama into the Bollyverse.  I enjoyed the novelty of the concept and the sweet way that it was implemented.  Perhaps I should watch a filmi again?