The Star Outside My Window, by Onjali Q. Rauf 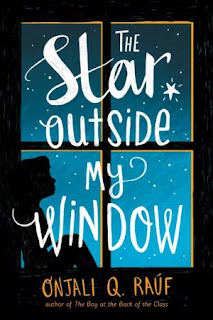 Due to repressed memories, Anjali is still a bit fuzzy on the details of how she and her little brother Noah ended up in foster care.  She knows that her mother disappeared, but no one is telling her why and Anjali has trouble speaking (let alone forming the words to ask her questions).  But when it is announced that a new star has appeared, Anjali suddenly knows where her mother is!  Mum explained to her once that when good people die they becomes stars in the sky.  So, it makes sense that her Mom would appear as a star!

There is a complication.  As a promotional stunt, the Royal Observatory is holding a contest to name the star.  Anjali knows she has to make sure that no one gives her mother the wrong name, but what can she do about it?  The contest has tens of thousands of entrants (and children aren't allowed to enter anyway!) so she has no way to effect a result directly.  She'll have to go and explain to the adults that they can't give her mother's star a different name.  Getting from Waverly Village (outside of Oxford) to Greenwich seems an insurmountable task for a ten year-old, but with some help from her friends, she and Noah set out on their bicycles to prevent the Observatory from giving the new star a wrong name.

Holding aside the breathtaking danger of the premise, this is a stirring adventure with resourceful children sticking together and accomplishing their goals.  Tt is all wrapped up a bit too neatly, but along the way the children get to show a few skills.  The suppressed memories that prove the motive for Anjali's obsession with naming the star have a poignancy to them that gives the story some weight.  Spending more time addressing those feelings would have fleshed the story out better, but (again) this being British kidlit, we don't have much comfort with exploring emotions.  Instead, the conclusion has to be that the adults will step in at the end and make everything better and Anjali and her friends don't need to worry themselves over grownup matters.  That's not a very empowering message, even if it is motivated by good intentions.