True Letters from a Fictional Life, by Kenneth Logan 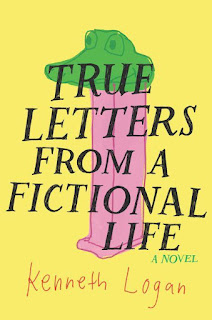 James lives an awkward double existence.  To his friends, he's a great athlete, a decent student, and boy that is too shy to express his thoughts or ever reciprocate his friend Teresa's affections.  But when he is alone, he has lots of private feelings, which he spills into letters.  He tells his teammates how they drive him nuts, apologizes to the poor gay kid who he and his teammates bully, and tries to explain to Teresa why he doesn't want to date her ever.  And he writes love letters to guys.  But none of these letters ever get sent out.  They live in his locked desk drawer.

For all of his life, James has struggled with these thoughts:  finding the courage to say what he really feels.  He wonders if any of it is worth saying.  He questions what he really wants.  When he meets a gay boy named Topher, it motivates him to step out.  He's afraid of what will happen but taking things slow is OK and seem to be going well.  But then someone breaks into his desk drawer and steals his letters.  And they start showing up in people's mailboxes.

I found this story disorganized and unfocused.  The pace is uneven and aimless.  I never really got a sense about what James saw in Topher and about why he was willing to come out because of him.  The great letter fiasco proved to be anti-climactic.  And Teresa, who could have been all sorts of things to this story about coming out, just came off as selfish and annoying, with little indication of where her appeal to him ever lay.  So, while I was sympathetic to James, he didn't seem to have interesting friends or an interesting life.  I never engaged with the story.