A Thousand Steps Into Night, by Traci Chee 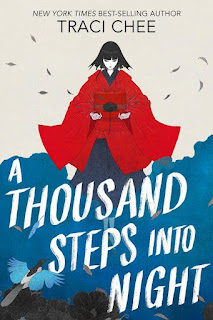 Set in a world full of demons, spirits, demi-gods, and gods, Chee's latest novel is a story of a young woman named Miuko.  Clumsy, awkward, and shy, Miuko is the last person one would expect of being capable of an adventure, but she finds herself cursed by a demon.  As a result, she is thrown out of her village and forced to make her own way.  Her primary objective becomes trying to undo the curse, which  is slowly turning her into a demon.  Achieving this goal forces her into greater and challenges involving a wide variety of magical beings.  Whenever she seems about to overcome a malevolent spirit or a trickster, another greater threat comes along.  In the end, Miuko's quest becomes a pivotal moment for her entire realm.

While infused with a feminist message and a gender inclusive world, this is not a terribly message-heavy story.  Rather, it was more of a traditional hack-and-slash fantasy novel, albeit with a dizzying array of characters.  The first forty pages or so are stuffed with footnotes, which while a bit distracting, are largely indispensable for understanding the rest of the story.  Despite that copious background development, I had largely lost track of the characters and the importance of various villains by the end.  I would strongly suggest keeping notes on who is who as you go as characters reappear and earlier events have a habit of becoming important later.  That is all a sign of good construction but I still found it a bit too much!  Too much work to be enjoyable.