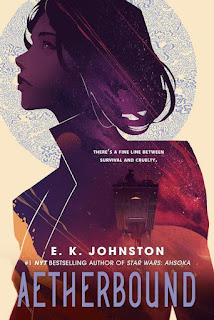 Since the collapse of the Empire, the space stations have been cut off from each other, but travel still takes place.  On the sublight spaceship Harland, travel between stops takes decades and the ship is run by a  single family, breeding the crew that they need.  It is not a big happy family, but they get the job done.

Pendt, judged to be a waste of food and oxygen, is kept alive until her eighteenth birthday so she can then be sold off.  But just a few weeks before the sale, the ship makes a rare docking and Pendt takes the opportunity to run.  Doing so, she finds a new life, with a loving new family, but there are unintended consequences.  Her birth family returns with demands that threaten not only Pendt, but the entire universe as well.

While there is some fantastic universe building in this tale, the storytelling is rough and the pacing uneven.  Given the setting's complexity, the story is initially buried in historical background which, while interesting, bogs down the pace.  To make up for that slow start, we jump forward through events quickly, which allows only the sketchiest of development.  This leaves the general feeling of an unfinished story.  Aside from Pendt herself, just about everyone is an unfinished portrayal, motivations are largely declared with little demonstration, and the climax, while based on all that backstory, comes up quite abruptly and feels rushed. It's not a question of length -- given the book's short length (241 pages), this easily could have been filled out.  It's more an issue of manuscript not ready to publish.