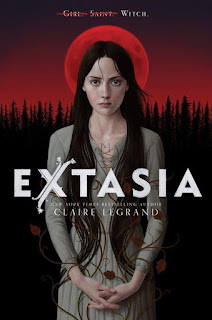 After the war which ended the world, Haven became the lost outpost of humanity.  Protected by God's grace and the piety of its all-male elders, it seeks to protect itself by vigilantly guarding itself from sin .  To atone for their central rolein the downfall of civilization, the women of Haven pay a continual price -- in servitude and suffering.  Fifteen year-old Amity, despite being the daughter of a fallen women, has just been anointed as one of Haven's "saints" -- a vaunted position with the horrifying responsibility to cleanse the sins of the village through enduring brutal ritualized beatings.

But as proud as Amity is in this perverse honor, she is aware that there are forces on the outside that are bringing change to Haven, whether its people embrace them or not.  A coven of witches are encircling the town and plotting the downfall of its patriarchal regime.  Men are being murdered.

Amity is stuck between two warring camps.  Through magic that she is just beginning to understand, she stands as a catalyst of change for her world. While Amity longs for an end to the suffering of her sisters, she also wants to protect her community and she is torn between those two desires.

A brutal and horrific setting featuring systematic physical and sexual abuse of young women.  While not  particularly explicit, this is a gory tale full of unpleasantries including child abuse, rape, and even a brief episode of cannibalism.  This is plenty of blood!

Legrand is shooting for a grand statement about overcoming institutional misogyny through empowerment and reconciliation, but it never quite comes together.  The problem is that the book is so good at showing the cruelties and atrocities, that there is little space for forgiveness. It is hard to not agree with Vengeance (one of the witches with whom Amity allies) who would just as soon kill every man and every female ally who aided them.  Amity (or Rage, the name to which she changes her name mid-novel is not a convincing leader for a kumbaya moment.  The story, while excellent at wallowing in horrors, never really grapples with what drives misogynistic impulses and so the story lacks the depth to reach for solutions.  It works for a horror/fantasy novel, but lacks gravitas.