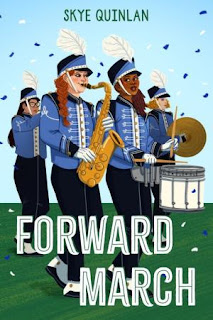 With her father campaigning for President of the United States, Harper is trying to be a good girl and stay out of trouble (doubly so, since her Mom is the dean at her school, Golden Oaks Academy).  So, it's something of a surprise when Margot tracks her down.  Between the fact that Margot is the daughter of the Canadian ambassador (a man whom her father can't stand) and is widely rumored to be a practicing lesbian (a lifestyle Harper's homophobic mother can't put up with), Margot is not exactly in Hunter's usual social circles.  And she comes bearing a shocking tale.

Margot has been corresponding (explicitly) on Tinder with someone purporting to be Hunter.  The great mystery is who and why?  And while that person is definitely not Hunter, Hunter is surprised to find that she soon wishes it had been.  For while not entirely sure how she feels, Hunter has to admit that Margot is kind of cute and she does sort of/maybe likes girls.  Not, of course, that she could ever let that become public because of what it would do to her father's political career and to her mother.  However, when someone lets the secret out, Hunter has to make some decisions about who she is trying to please and whose life she is really living.

While purporting to be a marching band story, I honestly found that part of the story weak and distracting.  The story is really about finding out who your true friends are.  They certainly are not the ones Hunter has collected around her.  By the end, pretty much every friend Hunter had at the beginning of the story turns out to be toxic and she's ended up with a complete new set of friends.  That's just one of the many turn-offs of this novel.  Hunter is a weak character who largely lets people walk over her and I really didn't care that much in the end what happened to her.  And the things that happened didn't seem to matter either:  (as already mentioned) the marching band setting was largely inconsequential, the political stuff likewise, the parents were not worth reconciling with, the friends were repulsive, and Hunter's self-realization never really materialized.