Hani and Ishu's Guide to Fake Dating, by Adiba Jaigirdar 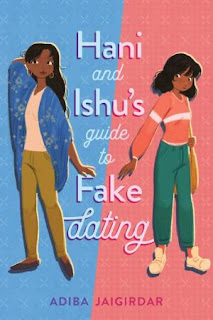 Hani's friends don't believe that she's bi-sexual. They think it's just a phase and that she'll come round eventually to dating one of the guys they set her up with.  Their doubts annoy Hani but she doesn't want to rock the boat with her A-list friends.  In desperation, she lies and claims that she's already seeing a girl and that it's Ishu -- the class overachiever and the only other Bengali girl in their school.  The problem is that Ishu doesn't even like Hani!  Somehow, Hani needs to convince her to go along with this charade or risk public ridicule.

Ishu has bigger problems.  Her older sister is dropping out of school to get married and her parents are scandalized.  To distract them, Ishu wants to get elected Head Girl at school.  But only popular girls get elected and Ishu's never considered making friends to be priority.  However, when Hani comes to her with an unusual request and needs a big favor, Ishu sees an opportunity.  A deal is hatched:  Ishu will pretend to be Hani's girlfriend and, in exchange, Hani will help ingratiate Ishu into her social circles and build up some social capital so that Ishu can win the election.

In true rom-com fashion, this rather tortured premise blooms in unexpected ways and in the end Hani and Ishu find that their relationship may be more real than either intended.  The result is a sweet and funny LGBT story of high school romance between two Irish-Bengali girls (checking off quite a few diversity checkboxes in the process).  I loved the ethnic flavoring and the attention to the family life that plays such a big role in Ishu and Hani's lives.  I also enjoyed reading an Irish YA story for the chance to visit a slightly different milieu.  Good characters (with realistic flaws and insecurities to offset their strengths) and excellent pacing make this an enjoyable read.