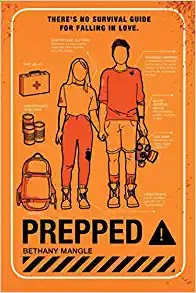 Becca has spent her whole life learning the skills she will need to survive the end of the world.  Her parents are preppers, devoting all of their energies and resources toward creating a well-defended compound.  She has learned a wide variety of survival techniques through continuous drills that their community has devised to maintain their skills.  However, after seventeen years of having to swim in icy water and run nighttime defensive maneuvers, she's had enough.  The fact that her mother has insisted that she marry boy-next-door Roy, a sweet but convinced prepper himself, is just more reason for her to run.

She's earned a scholarship for college and plans to leave after graduation.  But when a terrible accident occurs, the compound's belief in end times hits a higher intensity and Becca has to decide what she is willing to sacrifice to have her freedom and her dreams of a future not weighted down by fear.

A well-paced survival story that never really generated much interest in its characters.  They are largely two-dimensional, especially Becca's abusive mother.  I took Becca's love for her little sister at face value, because I never saw any real evidence of it.  And the romance between Becca and Roy largely fell flat.  It won't give you much insight into preppers but the setting at least allowed for an entertaining adventure.