The Memory of Cotton, by Ann K. Howley 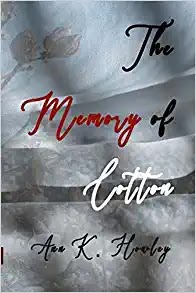 Shelby has felt lost since the death of her little brother.  She's quick to grow angry and prone to being mean to her family.  While she recognizes that she's in trouble, she feels helpless to change.  The only real anchors she has are her best friend Darrin and her grandmother.

One day, going through one of her grandmother's boxes with Darrin, they discover a Ku Klux Klan robe.  When they ask grandma about it, she is initially reluctant to explain, but a short while later, she changes her mind.  She announces that she'll explain everything but she needs to revisit her hometown in North Carolina and she needs Shelby and Darrin to drive here there.  Shelby has never been there.  The homecoming goes on to uncover several family secrets and along the way explore the foundations of discrimination and hatred.

A mixed bag.  I found the characters interesting and the story compelling  but I had a hard time getting into the story.  The storytelling is sketchy and needed to be fleshed out.  The overall theme of where hatred comes from is powerful, but the pieces of it (the contemporary town bully, the KKK membership, a murder, and even familial rejection) are left lying about.  Distractedly, Shelby's reconciliation with her brother's death sort of hangs as an outside theme, never quite adhering to the rest of the story.  Seen as an early draft, this is a knock-out story, but it really felt unfinished.

[Disclosure:  I received a free copy of the book from the publisher in exchange for an unbiased opinion.]