All the Best Liars, by Amelia Kahaney 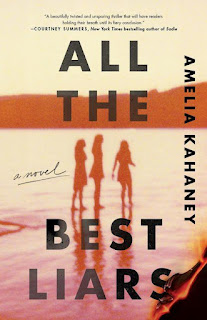 In a thriller that builds suspense off of the insecurities that adolescents bring with them and the way that sudden wealth can intensify those feelings, three girls' lives are forever tied together by a murder.  One of them is the victim and the other two are implicated in the death.  But when the police start to investigate, the truth is far more complicated than the detective can understand. "Girl drama," she dismisses the story that initially unfolds and right she is, but the stakes are every bit as real as a grownup's.  Through flashback, the girls recount a story of childhood confidences betrayed and the lengths to which each will go to make things "right."

Perhaps the world does not need another sociopath/mean girl story, but this novel transcended the genre for me, going through great pains to show a chain of plausible events that gradually blew out of control.  The story gains gravitas by not limiting itself to the children.  For while immaturity is the spark, the fuel for this fire comes from the grownups.  The girls in many cases are simply copying the vanity, classism, and greed of their elders.  It's makes for grim, but compelling reading. The shocking reveal is perfectly unfolded.