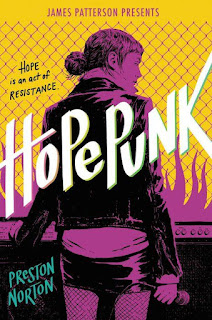 It was nearly a year ago that Hope's little sister Charity outed their older sister Faith to their parents.  In such a conservative family, the news that the eldest daughter was a lesbian did not go down well and Mom quickly prepared to send Faith away for conversion therapy.  But before that could be accomplished Faith ran away.  Now, the family struggles with angry, guilt, and grieving.  Mom defensively stands her ground but aches for her daughter to return home.  Dad guiltily tries to be a peacemaker between everyone.  Charity embraces the church, ignoring the rest of the family.  And Hope channels her grief and anger into music.

It seems that the family would just muddle through in dysfunction but then things are shook up when Hope's crush at school, a boy named Danny, comes out as gay and is thrown out of the house by his family.  In an act of atonement, Hope's family takes him in and an angry dynamic develops between Hope and Danny's twin brother Dylan.  Dylan is a nasty homophobe and forms a hate band called Alt-Rite, who write songs attacking Hope and her friends.  In response, Hope forms her own a band, a group of hopeless misfits called Hope Cassidy and the Sundance Kids, who challenge Alt-Rite in their school's Battle of the Bands.  A lesbian science-fiction story runs in parallel through alternate chapters and an internet influencer plays a prominent role as well in this mixture of social commentary and satire.

Norton is a good writer and I was quickly drawn in to the family tragedy that unfolds at the beginning.  I didn't initially get (and never really warmed to) the science fiction story, but I loved the depth of the characters.  The three sisters and their parents each had distinct personalities and roles to play.  Even Danny's outing and the way the family reunited over sheltering him presaged a fascinating look at the conflict between religious intolerance and charity.  But Norton has grander intentions for the story and that's when things really started running off the rails.  From the blatant hate speech to the official tolerance of bullying to the eventual official maleficence, I found myself being pushed towards accepting greater and greater levels of implausibility.  The conclusion is so utterly over the top that I just tuned the mess out.  In the end, it seemed a shame to take what was a really nice character study and fully-formed family tragedy and turn it into something absurd and over-the-top, especially with a subject as important as homophobia and the normalization of hatred.  Profoundly disappointing.