Melt With You, by Jennifer Dugan 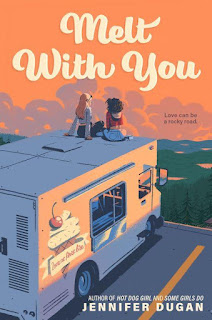 Fallon and Chloe were best friends growing up, but a night of no inhibitions right before Chloe went away to college led to an awkward goodbye and an end to the friendship.  A year later, they are no longer talking to each other, but they are going to have to work out their issues.  Their mothers are co-partners in an food truck, selling gourmet ice cream.  The business is struggling but there are interested investors.  The catch is that while the two women are meeting the investors, someone has to take the truck to some already-scheduled food festivals.  As a result, Fallon and Chloe are forced to take the truck on the road together alone.  Through their subsequent adventures on the road, they gradually break the ice, confront what happened between them, and work out what it means for their relationship now.

A lesbian romance set on a food truck -- part workplace hijinks and part road story -- that relies for much of its story on the central conceit that neither Fallon or Chloe are very good at communicating.  Rather, they are incredibly egocentric and inwardly focused.  It's so bad, in fact, that Fallon spends the first couple of chapters defending her stubbornness to the reader in a one-way Greek Chorus.  After a while though, Dugan gives up trying to justify the self-created tension of her drama queens and lets them just do their thing.  The result is frustrating as it becomes painfully obvious that if Fallon and Chloe just sat down and listened to each other (rather than constantly taking offense and having meltdowns) that they could happily settle down.  I just didn't care about them and I didn't like either of them.

That pretty much kills a romance story.