Queen of the Tiles, by Hanna Alkaf 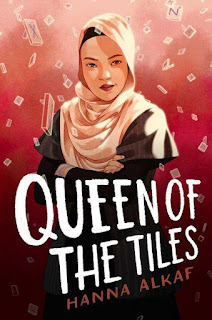 A year ago, Trina, a popular influencer and champion Scrabble player, reigned the Malaysian circuit as the "Queen of the Tiles," but then she mysteriously died literally on the game table during the finals.  Her friend Najwa hasn't really recovered.  After a year of absence from playing, dealing with panic attacks, guilt, and suspicions, Najwa has bravely decided to re-enter the world of competitive Scrabble.

The police ruled Trina's death to be the result of natural causes, but looking around the room at all the familiar faces, Najwa wonders if someone here had something to do with it.  And when Trina's Instagram account suddenly comes back to life, broadcasting anagram clues that only a Scrabble maven would appreciate, Najwa grows convinced that whoever was involved last year is planning a re-match.

A tense whodunnit that follows the standard pattern of evolving prime suspects and theories, but manages to nonetheless deliver plenty of twists and turns to keep the mystery solving fun.  The Malaysian setting and the Asian characters provide unusual color and make the story more interesting.  But the real winner is Najwa herself who proves a formidably capable detective in the grand tradition, ably sleuthing out the guilty party through a mastery of the world's most popular word game.  The final reveal is a disappointing throwaway, but doesn't overly detract from an original story and Alkaf's stirring love letter to competitive Scrabble.