The Best Liars in Riverview, by Lin Thompson 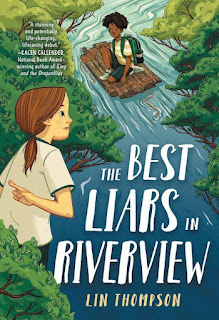 Aubrey and Joel have complicated games they play in the woods.  Games involving pirates, tales with fairies and magic, and elaborate stories of survival.  No one questioned their activities when they were kids  They kept their games private because they knew the other kids would not understand their make-believe.  But now that they are in middle school, things have become more complicated and the rules are changing in ways that they don't quite understand.  Being a girl is more complicated that Aubrey ever realized and, witnessing the bullying that Joel is enduring at school, it would seem that being a boy is no walk in the park.

And so, it doesn't really surprise Aubrey when she learns that Joel has gone missing.  She may even know where he is, but she doesn't really want to give away the secret.  When the grownups start asking her what she knows about his disappearance or where he might be, she lies.  She feels guilty about doing so, but she realizes that really everyone is lying is one way or another.  Her lies may not ever be the biggest ones.  That knowledge also convinces here that she needs to be the one to find him.

The story of Aubrey's search for Joel (with the help of a mutual friend Mari and Aubrey's older sister Teagan, heavy with remembrances and flashbacks, is more of a means to quest for identity -- a search that Aubrey is not really truly aware that she is on until the end.  The reveal is drawn out, but natural and organic to the characters.  We never are really told what they are and how they feel, but more allowed to travel with them as they discover things for themselves.  We're left with a sense of evolving emotions. We can see where the two of them are now and how they got this far, but not really who they will be yet.  That, in itself, feels particularly appropriate for a middle reader.