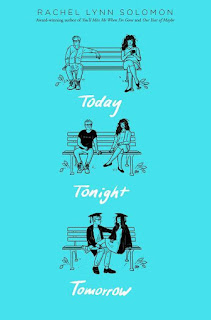 In this romance set in Seattle, Rowan and Neil are the two top academic stars at their high school.  For years, they have fought each other for each of their school's honors to a degree that everyone else considers obsessive.  And while some might suspect that there was a romantic tension behind their competition, Rowan is quick to reject that.  She hates Neil.  Now nearing graduation, they are approaching the biggest one:  who will be valedictorian.

But even when that ultimate is dispensed, their competition still remains fierce.  Their high school has an annual tradition -- the senior Howl, an assassination-themed scavenger hunt.  The seniors are given a list of fifteen items to find and the name of another senior for them to "kill" (by stealing the armband that each of them must wear). The goal is to find the fifteen items first and avoid getting killed by an opponent.  Rowan intends to annihilate Neil and end her high school career on a victory.  But instead, Rowan and Neil find themselves teaming up.  At first, they are reluctant, but gradually they grow close  enough that by the end their relationship becomes more important than the game.

I loved all the city details, with its combination of well-known and obscure spots that made up the scavenger hunt (this is definitely a much more fun story if you know Seattle!).  I was less taken by the story which seem drawn out and meandering.  For kids that are supposed to be such over achievers, they seemed awfully unfocussed and were far too easily distracted.  I would have had a better time with the story if they had just aced the hunt and then turned to focusing on their relationship -- that would feel more in character.

There's an interesting digression about Rowan and Neil's experiences as the only Jews in their school and a bonding that occurs in sharing their recollections of the microaggressions they have experienced.  It serves as one of the things that brings them together and it becomes character-defining, but it's introduced awfully late and abruptly (on page 119, in a strange scene where a classmate makes an anti-Semitic remark).  Somehow, we're supposed to accept that Rowan's Jewish identity is definitive, despite the fact that she doesn't mention a word about it for the first third of the book.

The story is a love letter to romance novels.  It reminded me a bit of Before Sunrise, with its combination of city exploration and extemporaneous adventures at night, but it didn't have much to add to the genre.
Posted by Paul at 10:50 AM