Daughter of the Pirate King, by Tricia Levenseller 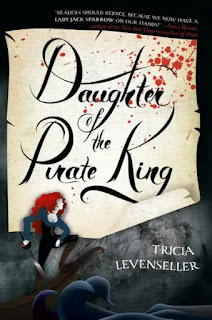 As the daughter of the Pirate King, Alosa is a pretty unusual seventeen year-old but she is also quite relatable.  On a mission from her father to help him locate two of the three pieces of a map that will reveal the greatest treasure of all, she allows herself to be taken captive.  It's her father's plan and she has to do what Daddy wants.  But while she's cold blooded enough to think nothing of sacrificing her men's lives, she insists that she will only surrender as long as she retains access to her vast wardrobe and makeup.  A girl's got to look good when she's pretending to be a prisoner so she can spy on her enemy!

And while her captives think they have the upper hand, she proves them wrong repeatedly as she escapes the brig night after night so she can conduct her search.  Captain Draxen is cruel boy and quickly loses his patience with her games, but his more thoughtful, kinder, and (coincidentally) better looking brother Riden in intrigued by her.  And while Riden must play his role as her captor, there's no denying the reluctant bond that is forming between them that will involve plenty of bloodshed, some delicious kissing, and lots of respectful intimacy.

While well-paced and entertaining, I never knew quite whether to take it seriously or not.  For while Levenseller wants to portray her heroine as a tough and resourceful warrior, she also expends concerted effort in making Alosa the type of girl to whom suburban teens can aspire (obsessed with fashion, loyal to her besties, skilled at keeping boys in their place, etc.).  Don't get me wrong, I can fully see the parallels between adolescent girls and bloodthirsty pirates, but the joke's taken a bit far and the silliness detracts from the story.  There's also the small matter of magic, which makes an appearance about half-way through the story providing a surprisingly boring reason for Alosa'a extraordinary skills (instead of basing them on Alosa's hard work and determination).

As the first in a series, though, the book really has only one purpose: to entice people to read the rest.  So, the book provides a strong introduction to Alosa's character, giving her enough resources and talents to take her boldly into a planned series of adventures of unknown duration.  Multiple characters (including Alosa's own band of teen girl pirates) are briefly introduced, giving us a teaser of what awaits when Alosa and her besties set sail in search of wealth and handsome frocks!