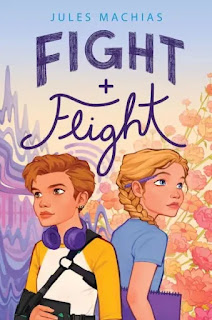 Avery is a dirt bike enthusiast facing a recent diagnosis of Ehlers-Danlos syndrome, a disease that causes hypermobility and puts her in unmanageable pain.  Facing a life full of physical therapy and gradual deterioration, she feels out of control and overly dependent on others.

Sarah suffers from a panic disorder, set off a few years ago by the death of a beloved aunt.  While she has a number of coping mechanisms, notably including sketching and doodling, she struggles with an overly protective mother, an emotionally disengaged father, and a very angry older brother.

Their poor coping skills experience an additional setback when their middle school performs an ill-advised realistic active shooter drill that injures Avery and aggravates Sarah's anxieties.  But the incident also motivates both girls to take action:  Avery funnels her anger at her declining health into a plan to seek revenge against the principal, while Sarah chooses the positive approach of rallying and organizing student opinion.  Both of them learn how to better cope with their personal issues through the experience.  In a somewhat disjointed way throughout the novel, Machias also addresses transphobia, classism, racial privilege, and bullying.

Machias is a developing talent.  I tried unsuccessfully to read her debut novel Both Can Be True, but abandoned it for being clunky and didactic.  This is a substantially better novel, but the tendency to stuff the story with largely unrelated topics (Avery's BIPOC friend Mason being the most notable example) suggests that her biggest challenge is keeping focus and knowing which stories she wants to tell.  It is unclear if Avery and Sarah were being set up to have a romantic relationship (there's plenty of points in the story where it felt that way), but in the end the idea is largely abandoned.

All this superfluous material takes energy away from the main story (the girls' emotional growing ability to take responsibility for themselves).  It's a hard story to tell and didn't work for me in the end. While Machias makes some effort to create a catalyst, Avery's switch from avenging to forgiving is abrupt and her sudden willingness to communicate with adults felt implausibly rushed.  Sarah's growing bravery, prompted as much by her older brother as by internal changes, felt more plausible.

But there are also things in the book to love.  Avery's feelings of hopelessness are explored well, from her coping method of bossing others around to her denial of her symptoms.  The author's realistic portrayals of adults (always a big thing for me!) are much appreciated.  But very best of all is the whole design of the book.  Told by the girls in alternating chapters, Sarah's doodle-filled pages are a true delight.  Every page features original pen and ink drawings from the author, ranging from decorative borders to fanciful animal sketches to beautiful Spirograph creations (Heavens!  I had forgotten all about Spirograph!).  I strongly recommend spending some time just browsing the pages of this book just for the art!