Stand on the Sky, by Erin Bow 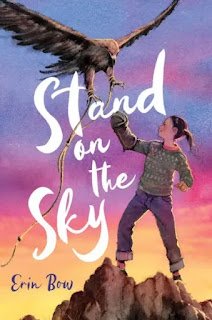 A young Kazakh girl rejects tradition and becomes a champion eagle huntress.  Similar to the documentary The Eagle Huntress, thirteen year-old Aisulu struggles against immense odds to develop the skills  and the rapport with a golden eagle to not only become a huntress but to compete in the annual Eagle Festival.  The stakes in this fictional tale are significantly higher than the film because the prize money from the Festival could cover her crippled brother's medical expenses. Without it, the family will be forced to sell their livestock and abandon their life as nomadic herders on the steppes.  Finding allies and friends in unexpected places, Aisulu learns lessons about family and loyalty in a rewarding story of animal bonding and coming of age.

While The Eagle Huntress was (mostly) real, I actually found this novel more realistic.  Bow spent considerable time in Mongolia researching the people and their lives and the story is abundant with cultural details.  While some critics have decried "cultural appropriation" and I found more than a few Westernizations that rang false, overall the story provides a rich and respectful depiction of daily life and cultural values.  The result of that hard work is a deeper, more rewarding story about how Aisulu, through the experience of building a bond with her eagle, in turn builds a stronger bond with her community.  More could certainly have been done with this material (for example, her estrangement from her own mother was a frustratingly neglected thread) but the theme gave the story gravitas beyond the single-focused girl-power message of the film.