The Girl Who Fell Beneath the Sea, by Axie Oh 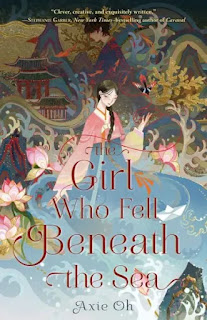 Mina's village has been subjected to more and more violent storms every year.  The Sea God no longer protects them because of a curse; a curse that can only be broken by the sacrifice of a young maiden.  Shim Cheong, the most beautiful girl and the love of Mina's older brother, has been sent to the ocean to be given over to the Sea God.  He's heartbroken and Mina is determined to interfere.  Before Shim can be tossed in, Mina offers herself instead.

In the Spirit Realm where gods, demons, dragons, and many fearsome creatures dwell, Mina finds the Sea God in a deep sleep.  And someone is trying to make sure that he stays that way.  Making strange alliances, Mina tries to outwit the gods with rather unexpected results.  She finds herself locked in a celestial love triangle with enormous implications for both the Spirit Realm and the world above.

A dizzying retelling of a Korean myth that is beautiful done but which I found maddeningly difficult to read. The unfamiliar world of gods and spirits presents quite an initial barrier to overcome.  The story unfolds with lots of unexpected surprises (many of which did not make much sense).  In the end, I gave up trying and simply let the story carry me along, but I missed out on a lot of things.  It didn't help that there is a large cast and not much effort to build the characters.  So, I give the story high marks for creativity and vivid world-building, but found it a very difficult slog and nearly impossible to follow.