A Kind of Spark, by Elle McNicoll 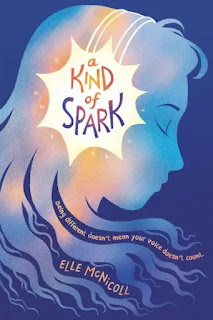 Addie is very surprised to learn in school that her small Scottish town was the site of a large witch trial.  It hits home because she knows, as an autistic person, that she would have been targeted as a witch herself if she had lived in those days.  Her attempts to interest her classmates and her neighbors in the subject enough to get the town to erect some sort of memorial for the victims falls on deaf ears.  People don't want to be reminded of past cruelty.

It doesn't stop them from acting cruelly in the present either.  At school, Addie faces bullying from her classmates, actively encouraged by an unsympathetic teacher.  And while the worst of it comes mostly from an old friend, Addie is aware that the others felt fine standing back and doing nothing to defend her.

Meanwhile, Addie is concerned about her older sister (who is also autistic) and the problems she is having coping at uni.  It would seem that the world has a hard time handling people with differences.  The most common reaction is fear and violence.

I enjoyed the book and found it to be one of the better recent novels about autism.  I found Addie a wonderful ambassador for neurodiversity.  The explanations she provides for how she processes sensory input are straightforward and insightful.  Her wise-beyond-her-years maturity made sense in the context of having to deal with so much more at a younger age.  Be warned that the abuse scenes are triggering and a bit over-the-top (unless Scotland's current treatment of autism is particularly dire) but certainly add dramatic tension to the story.