Postcards from Summer, by Cynthia Platt 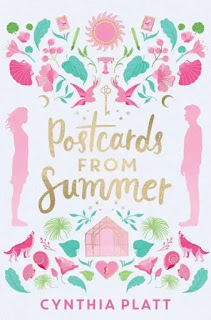 Lexi's never known much about her mother.  Her father has always demurred or evaded her questions.  So, when she receives a beautiful box covered with mosaics and full of her mother's ephemera, she is overwhelmed.  The seemingly random contents don't deliver the answers that Lexi is seeking, but they provide her clues.  Most importantly, they point her towards Mackinac Island, where apparently Lexi's mother spent her summers.  Lexi knows that there is no way her father and stepmother would ever let her go to visit, so she lies about taking a college tour and instead sneaks off to the Island on her own.  Picking up more leads when she gets there is hard work, but she makes interesting friends, including a retired Broadway starlet who offers emotional support.

In parallel to Lexi's story is the tale of Lexi's mother Emma (twenty years earlier). At the time, Emma is struggling to convince her parents of her conviction to pursue a career in the arts while her boyfriend Ryan is similarly fighting his ambitious politician father's plans for him.  The young people's fates get overtaken by a tragedy that has repercussions to the current day as Emma uncovers as she seeks out who her mother was.

Although some elements of the plot (e.g., the NDA) stretched plausibility, I found the story compelling although to keep reading.  I just wished that the story moved more briskly.  Both Lexi and Emma suffer from panic attacks, which is mostly manifested in the story through dialogue scenes where nothing actually happens.  The typical scene consists of one of them racing to find someone, having nothing to say when they find this person, and then dramatically fleeing afterwards.  The times when a character does not say what is on their mind or refuses to say what is on their mind or lies about what is on their mind is frustratingly frequent.  A certain amount of drama can be reasonably created from such plot padding devices but at some point one wants to see a breakthrough.  As a result, we actually find out surprising little about the characters.  Due to everyone's inability to express a complete thought aloud, little information is actually exchanged.  Thus, the progress of the story to its conclusion is largely dependent upon the periodic introduction of surprising new facts.

This extremely lengthy (566 page) novel definitely could have benefitted from trimming.  It also suffers from a rather higher-than-normal quantity of typographical errors, indicative of a poor final proofreading.  This is especially ironic as the author is an editor and trumpets her editorial service in the blurb.  This novel makes for an very unfortunate calling card.