The Honeys, by Ryan LaSala 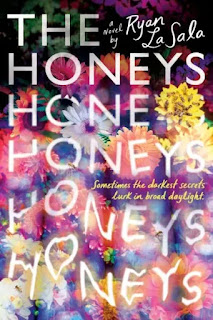 This horror story starts off with a bang as Mars awakens to find his sister unexpectedly home early from summer camp and aiming to kill him.  When he manages to overpower her and kill her instead, his wealthy and influential family covers up the traces and leaves Mars with questions.  What has been going on at the Aspen Conservancy Summer Camp that drove his sister to become a psychopathic killer?  There's only one way to find out and that is to return to the Camp himself.

Mars makes that decision with some trepidation.  He once attended regularly, but the camp's intolerance for Mars's gender fluidity and a violent hazing incident drove him away.  Returning now, he's determined to face the Camp's sexist and obsessive binary culture head on.  As expected, he's less than welcome by the boys.  But his sister's former cabinmates are surprisingly cordial.  Known as "the Honeys" for their mysterious Queen Bee ways and the fact that they tend the camp's bee hives, the girls make Mars feel at home -- inviting Mars to be herself when she's feeling more feminine and providing an alternative to the macho culture of the boys.

But the Honeys are far from benign.  Somehow, they are connected with his sister's madness.  It all has something to do with the bees.  Soon, further disappearances and unfortunate events are taking place.  And the longer Mars is at camp, the more and more he notices -- the way that the traditions have become tired, like the way the cabins are becoming decrepit.  There is an air of desperation among the administrators.  Aspen Conservancy itself is dying and taking the campers with it.

A slow burning but captivating thriller in the tradition of The Wicker Man (with a strong apiary theme), which stumbles a bit at the end when LaSala scrambles to tie up everything as the world crumbles.  The bees made a perfect malevolent yet amoral nemesis.

But more than being gothic horror, LaSala truly has worked in Mars's gender identity into the story.  These days, it's hard to find a YA novel that isn't full of gender queer protagonists, but most of them are either afterthoughts or the identity issue is the point of the novel.  Here, the story truly needs Mars to be gender fluid.  His/her ability to drift between the conflicting worlds of the male and female campers is what gives him his insights.  And the sexual roles of bees being so different from those of human serve to accentuate Mars's non-binary identity.  This is not a book about being binary, but it is a story where it is critical that the key character is everything that Mars is.