The Silence That Binds Us, by Joanna Ho 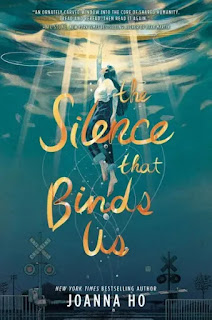 When May's brother kills himself, her family is left reeling.  He was so successful and even on his way to Princeton next year.  It's incomprehensible that he would be so unhappy that he'd commit suicide.  But while they can't figure it out, one thing is certain:  the accusation made by a local entrepreneur that the boy killed himself because of the excessive pressure that Asian parents put on their children is entirely false.  Stung by the racism behind the sentiment, May lashes out by sending a protest poem to the local paper.  Her parents, horrified by the backlash that they expect to ensue, urge her to lay low and not make a fuss.  But when the response does come, May is so incensed that she joins up with her Black and other Asian classmates to plan direct action to "take back the narrative."

With the help of a sympathetic teacher and some difficult lessons from her classmates, May learns more about the history of anti-Asian racism, the experiences shared with other minorities and how they differ, and also confronts her only biases.  At points this is interesting and educational reading.  At other times it can seem like a classic example of the excesses of well-meaning liberals (of the sort that the Right likes to call "wokeness") and a rosy kumbaya conclusion where the kids take over the asylum felt painfully naïve and over-the-top.  However, it never ceases to be enlightening, even if the brother's suicide is largely marginalized in the process.

Despite my misgivings, the book is well-written and engaging.  The relationship between May and her Black BFF Tiya is complex and fascinating.  There are some amazing deeply felt conversations about race and class that largely transcend the story.  Obviously, a polemical novel like this is going to alienate a quarter of its potential readership and bore the quarter whom are already convinced, but it's for the other half in the middle that such works are written.