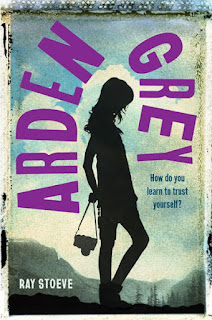 Arden's mother has moved out, abandoning her family and leaving Arden and her brother lost, confused, and angry.  Meanwhile, Arden's  trans best friend Jamie has started dating his first girlfriend and suddenly doesn't want to be around Arden.  And finally, Arden is dealing with a first crush of her own with a girl in the photography club -- a girl she likes a lot but for whom she feels no sexual desire.

Packed into this melodrama are a number of other fairly intense issues including sexual harassment, domestic abuse, and alcohol abuse  And there's a more traditional thread with Arden overcoming her fears of failure and submitting her work for a local gallery showing.

Despite being a very busy book, most of it runs pretty smoothly, mostly because of Stoeve's talent for forming strong characters.  As many things as Arden has going on in her life, I never really lost track of them.  And even the secondary characters have enough depth to them that it is fairly easy to track everyone and keep up with the story.  Still, there were some important threads (like Jamie's romantic relationship) that felt very rushed and poorly developed.

<Soapbox>And then there's my own discomfort with the ideology of the book.  Representation is important, but it seems silly to portray a sixteen year-old's reticence about sex as an orientation.  She could very well turn out to be Ace (as she worries endlessly about) but when did we get to the point where sixteen year-olds were so expected to have libidos that not displaying one needed to be explained with a sexual orientation?  I felt sorry that Arden feels so guilty about not wanting to have sex that she has to come up with her self-diagnosis (a decision she never really seems entirely comfortable with).  Honestly, it really doesn't matter at that age!  What's wrong is the pressure to choose a sexual orientation of any sort before you are ready!</Soapbox>