I Am the Ghost In Your House, by Mar Romasco-Moore 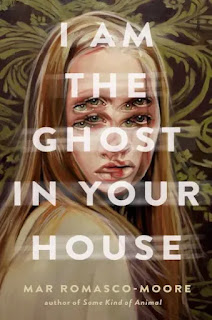 It's one thing to feel invisible, to agonize over the idea that no one sees who you are (or notices you at all), but what if you actually were invisible?

No one can see seventeen year-old Pie, except her mother (who is also invisible).  Corporal but not seeable, they can be injured or get sick, need food and shelter, and have all the basic emotional needs of others. Pie and her mother can slip in and out of places without being seen, but they have to be especially careful where they walk (otherwise people will run into them or cars will hit them).  They can't work jobs or go to school.  Instead, they live a nomadic life, squatting unnoticed in people's spare bedrooms and stealing whatever food or other things they need to live.  Revealing themselves to others would be unimaginably dangerous, so they live totally isolated lives.

That remarkable existence is threatened when Pie's mother mysteriously vanishes, becoming invisible to Pie as well.  Abandoned and scared, Pie seeks solace amongst a group of young artists and musicians.  Desperate for companionship, she even breaks their cardinal rule of keeping to themselves and reaches out, revealing herself to these people. To her surprise, she is accepted.  However, there are complications, particularly when Pie's past comes to haunt her.

This idea of an invisible girl takes a bit of explaining, but proves to be fertile ground for examining image, presentation, and the ways we perceive others.  Some of the elements of the story work better than others -- Pie's relationship with her visible friend Denise was sweet, while Pie's mother was thinly developed and the search for her was clunky and underdeveloped -- but the story was well-written and intriguing. Pie for all of her exotic novelty is relatable and normal enough to be sympathetic to the reader. I enjoyed the book.