The Color of the Sky is the Shape of the Heart, by Chesil (trans. Takami Nieda) 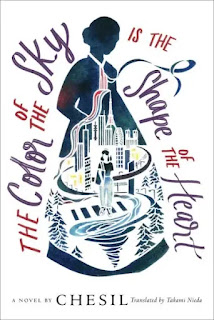 Ginny Park is delivered an ultimatum by her principal:  either start doing the work or leave.  It wouldn't be the first time she's been kicked out.  After she was expelled from her school in Hawaii, Stephanie, a renown children's book illustrator, rescued her and brought her to Oregon.  But Ginny's troubles started back in Japan, where she experienced racial discrimination and sexual violence for being Korean.  In response to which she committed a striking symbolic act.

As Ginny explains to Stephanie, the expression which make up the book's long title is a rough translation of a Japanese saying.  It means that the way that you perceive simple things will dictate everything about your heart and your life.  Shift the way you see those things and you instantly transform your life from bad to good (or good to bad).  For Ginny, her experience of being Korean (and North Korean specifically) have informed her life and transforming how she viewed her victimization in turn changes her.

Told in spare and often cryptic chapters that are mostly retrospective, Chesil's short award-winning short novel was a sensation when it was published in Japan six years ago.  Translated into English, the story has a opaque tone that is often hard to follow.  Like haiku to a sonnet, Chesil's storytelling implies far more than it tells.  That works to the book's advantage at some points and frustrates at others. Key details (what actually happened in Hawaii, how did Stephanie come into the picture, etc.) are left undeveloped.  It's a bit surreal to read a book set in Oregon that was originally written in Japanese and those parts are the hardest to follow and feel the least authentic.  Only when the story shifts back to Japan does it really come alive.

For readers unfamiliar with Japan's unhappy relationship with its ethnic Korean citizens, much of this story will be a revelation, but the subject is hardly novel (the landmark 1968 Japanese film Death by Hanging is the earliest example with which I am familiar, but I am sure there are earlier examples).  What was more interesting to me was the North Korean-Japanese relationship that is particular to this story.  Regardless, I find it hard to imagine this subject would be of particular interest to adolescents in the United States and the writing's impenetrable prose will be a turn off as well.  In truth, this is more modern adult than contemporary YA (publishers need to stop assuming that adult books with an adolescent protagonist are automatically YA).  This novel is unlikely to attract much of a teen audience.