This Is Not the Jess Show, by Anna Carey 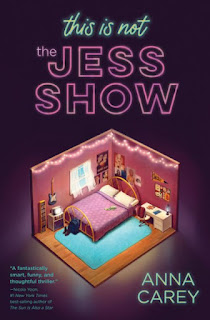 It's 1998 and Jess is a typical junior in her perfect town of Swickley.  But typical in Swickley always seems to have a dramatic flare, like the hurricane that damaged the town one spring or diagnosis of her younger sister's rare terminal disease (also in the spring) or the fact that half the town is home sick with the flu (springtime again).  And if that wasn't weird enough, Jess keeps hearing voices chanting from far away.  And there's that time that one of her friends dropped a strange black rectangle with an apple logo on it. All of these weirdnesses start piling up and soon Jess is questioning the nature of her world and whether it is even real...which it isn't.

Strangely enough, for a novel about a person who finds that their life is one big television show, the one reference that no one makes is to the 1998 Jim Carey film, The Truman Show. The similarities don't just lie with the basic premise but also with the critique of reality shows and celebrity obsession.  For Anna Carey, there's so much more to call out now (social media, TikTok, the gig economy, etc.), but all that does is make the story darkly nihilistic.

In the movie, Ed Harris's Christof eventually gives up and lets Truman go, but the "producers" of the Jess Show (who are largely off-screen) are beyond the reach of some sentimental happy ending. Jess doesn't stand a chance against the corporate behemoth that Carey concocts.  That leads to a heartbreaking conclusion that the story chooses not to dwell on, leaving a strong sense of injustice and unfinished business that will feed some desire for the sequel, which promises to be darker still.

The pacing is quite brisk and this is a hard book to put down.  I enjoyed the first half as Jess slow revealed clue after clue that her town isn't the place she thought it was.  The second half, in which Jess goes to ground, doesn't work as well for me as there wasn't much of anywhere to go with the story.