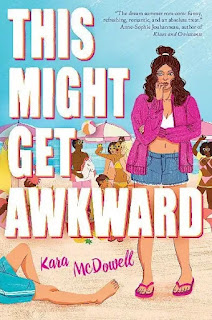 In social situations, Gemma struggles with uncontrollable anxiety.  That doesn't mean that she don't want to have a social life, friends, and a boyfriend, but she knows that she'd never be able to handle the real thing.  So, when she finds herself trapped at a beach party, she does her best to lay low and simply observe like a fly on the wall.  That includes gazing longingly at Beau Booker, the guy she's long desired.  While stalking him might be creepy, it puts her in a unique position when he suffers a life-threatening injury in the water and she's the only one who sees it happen.

After she rescues him, he is taken to the hospital and put in a medical coma.  A misunderstanding develops and Gemma gets identified as Beau's girlfriend.  Gemma, paralyzed by her social anxiety, can't bring herself to contradict the story.  With impending dread of what will happen when Beau wakes up, Gemma feels compelled to play along and things pretty much run away from her.  The only one who seems to think that something is off is Beau's brother Griff.  That suspicion turns to unexpected friendship as the weeks go by and Gemma and Griff start developing feelings for each other that complicate everything.

While there is some serious attention given to social anxiety and clinical depression, as well as to the environmental damage taking place at Lake Powell (where the novel takes place), this is first and foremost a rom-com.  As such, it relies on the appeal of its characters and is where the book didn't work for me.  I really didn't feel more attraction to them.  Gemma isn't just socially awkward, she's dysfunctional and grating.  The scenes that are supposed to be funny just seemed painful and cruel. The boys are self-absorbed.  Beau (playing the role of the "wrong boy") is shallow and unworthy of any sort of crush.  While Griff expresses concern for Gemma and gets to be the good guy who works her through some of her anxiety, he's ultimately controlling and manipulative.  They just weren't characters I ended up caring about.