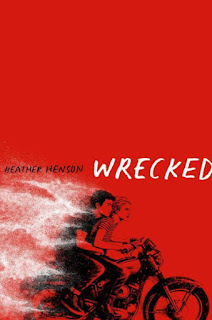 While Miri has never seen the lab, she has a pretty good idea about what her father is doing on a stretch of their property and she has a pretty good idea of why he's called "the Wizard." She'd prefer not to think about any of that.  She just wants to focus on her motorbike and dreams of spending her life being a grease monkey and getting as far away from her Dad's life as she can when she turns 18.

What isn't so common is city boy Fen, recently relocated to the area to live with his father. His favorite pastime is sampling sounds and using the snippets to create sound collages.  It's a hobby that got him in trouble back in Detroit and it will soon enough get him into trouble here.

When the two of them literally run into each other, they click as just the thing the other person needs.  And while he is heading to college someday, that doesn't stop them from getting close and the two them develop a close fantasy romance -- living in an idyll that ignores the literally explosive events that are happening around them.

The result is a tense and taut tragedy, loosely based on Shakespeare's The Tempest, the contrasts the innocence of young love with the harsh world of the opioid epidemic.  While it is easy in the beginning to ignore the danger and fall in love with Miri and Fen's optimism, by the end it becomes painful to watch the romance knowing just how bad things are about to go. And while the tragedy is pre-ordained, Hanson packs in enough surprises at the end to surprise us.

It's precisely the ending that becomes the weakest part of the story -- so much gets packed into those final pages that it can't help but feel rushed (and adding an epilogue on as well seemed excessive).  Still, I found the story compelling in the way that good tragedy can be:  where everyone except the characters can see how sidewise everything is heading and the whole thing becomes sickeningly inevitable. Thrilling!