A Venom Dark and Sweet, by Judy I. Lin 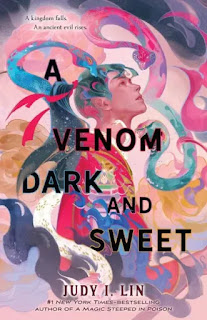 This is the sequel to A Magic Steeped in Poison, which I reviewed two months ago.  At the conclusion of the first book, the tea competition was swept aside by a power struggle over who was going to rule after the death of the emperor.  The emperor had been slain, General Li had seized power, and Chancellor Zhou had been revealed as the power behind the coup.  Both our heroine Ning and Princess Zhen were on the run.

This book picks up right where we left off and traces Ning and Zhen's search to find allies and uncover what actually just happened at the palace.  What becomes clear quite quickly is that this isn't just some  normal palace coup d'état.  General Li and Chancellor Zhou may have plotted to claim the throne, but behind them lurk far more powerful demonic forces with aims much deeper than simply claiming the throne.  To defeat such evil, ancient relics and magic will be necessary.

In a clear break from the first book, the story is now broken into two points of view:  Ning's continuing narration and the general's son Kang's story.  Given his rather confusing role in the first book as both Ning's love interest and as a turncoat that betrays her, he ought to be the most interesting character, but Kang is largely relegated to reporting what is happening amidst the bad guys.

The first book focused on a tea competition and captivated me with its innovative use of Traditional Chinese Medicine in the story.  In combining elements that (while exotic) were based on real practices with magic that was more fantastic, we were treated to what I would consider a true Western fantasy novel with Chinese characteristics.  The sequel loses much of that charm and instead embraces a far more traditional story of swords and sorcerers.  It's a well-told story with a lot of color and non-stop action, but nothing that really makes it stand out.

In any case, note that this is not a book that you can just pick up without having read the first book. There's no recap and no re-introduction of characters.  If you don't remember book one, you'll be largely lost for much of book two.  Since the first book is the superior installment, that's no great sacrifice.