Every Word You Never Said, by Jordon Greene 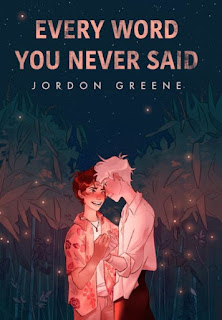 Skyler suffers from two issues: mutism (an inability to speak that has been with him for the past ten years or more) and anxiety (caused from the trauma of being a foster child).  Now settled in North Carolina with very open-minded foster parents, he faces two new major challenges:  getting the school to accept his desire to wear dresses in school and his first boyfriend, Jacob.  While Skyler's foster parents are supportive of his choices, Jacob's father is leading a crusade to keep boys in pants and keeps gays out of the schools (that the two things are unrelated but keep getting classed together is  a consistent source of confusion for the characters and the book).

Of course, young love is not smooth sailing. The two boys struggle to form a romantic attachment amidst the chaos of their battle with the school board over the dress code and with Skyler's fears of abandonment.

It's a fun read, but I was bugged by its flaws.

As a romance, the novel follows the typical drama cycle (boy loses boy, boy forgives boy) and can be quite endearing.  However, it gets bogged down in Skyler's insecurities.  And while those are understandable, Skyler comes off poorly and one can't help but feel bad for Jacob (who certainly has a harder family situation with which to deal).

The romance also sucks some life out of the crusade to overturn the dress code, but that part of the story is in trouble from the start.   The conflict is rather lame, the bad guys are drawn paper thin, and the arguments on both side are repetitive and poorly articulated.  I know that this is a book in which we are supposed to root for our boys, but there's no real drama to the story.  The role of homophobia in the debate is largely ignored, leaving the whole thing to rhetoric.  Given how poorly positions are presented, we have no plausible reason to accept that Jacob's father would convince anyone to follow him.

And then there is all the stuff that was left on the table.  The mutism, while important in the beginning,  never gets used in any particularly important way (largely getting in the way by the end).  It was a cute idea, but I would have saved it for another book where it could be part of the story.  And despite all of the attempts to explain that being gay and wearing dresses are not the same thing, Greene's decision to make his character gay and a cross dresser creates a grey sexual area that could well have been explored.