Fire Becomes Her, by Rosiee Thor 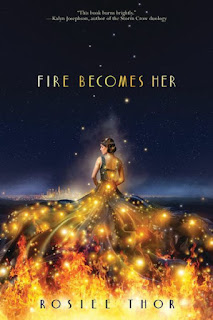 An alt-historical political thriller in which a young woman helps change the way that magic is distributed.

Power is defined by who has flare -- a liquid that, when consumed, brings pleasure and gives the imbiber the ability to burn things.  A few people have more flare than they know what to do with and they flaunt it by consuming it in cocktails and using it to design fancy clothes.  For the vast majority, however, there isn't enough flare to heat their homes or provide for their basic needs.  Flare (or the lack of it) separates the rich and the poor.

Ingrid's father was sent to jail for stealing flare to feed his family and Ingrid was raised in an orphanage.  But a stroke of luck saw her granted a scholarship at a prestigious private school  And from there, she has ambitions of entering politics as an intern for presidential candidate Senator Holt.  At the same time, she also has ambitions on Linden, the Senator's son.  The Senator will never consent for lower class Ingrid to marry his son, but Linden is convinced that they can change his mind.  For all that plotting, it is fairly obvious that Linden can't manage to stand up to his Dad and Ingrid is condemned to sitting in the background, ignored and wasted on the Senator's staff.

To make things harder, Ingrid cannot deny that Senator Holt's platform focus on law and order and enforcing the status quo does not align with her own beliefs.  It is his opponent, Gwendolyn Meyers -- running a campaign on flare equity and redistributing flare -- to whom Ingrid has personal reasons to be drawn.  In order to win Holt's approval, Ingrid volunteers to go undercover as a spy in the Meyers campaign, but she has conflicted loyalties from the beginning.

By all rights, Meyers ought to be the popular favorite, but a group of terrorists is committing acts of violence designed to sabotage the election and Holt's focus on security undermines Meyers's promotion of equity. Stuck in the middle, Ingrid can't help but marvel at how convenient the terrorist activity seems to be and she suspects Holt is behind it, but the majority of the victims are Holt's people.

A busy and compelling thriller which is marred by the looseness of its defining conceit -- flare.  Flare is a commodity in high demand.  It is both a basic necessity for life and also something that is wasted and misused by the wealthy (thus a stand-in for wealth itself).  It is a weapon used to destroy people but it can also somehow be used for defense.  It is used to vote (with some sort of weighting of ballots defined by the quantity of flare behind them).  It is incapable of being made by common people (until it is homebrewed later in the story).  It has addictive qualities (like opioids).  And it is some form of magic.  You get the idea. Flare is all sorts of things and never really clearly defined.  That looseness allows it to be used as a proxy for inequality, class, moral decline, and corruption; as well as a nifty weapon for action scenes.  It's a murky concept and almost everything touched by flare becomes similarly muddy.  So, while I liked Ingrid and I loved the complicated plotting and counter-plotting of the story, flare didn't really work for me.