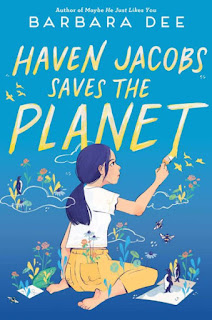 Haven worries about the future of the planet.  A lot.  So much so that she can't sleep at night and can't focus on her classes.  She keeps reading things melting ice caps and dying penguins and polar bears and how all the animals will die!  Even her friends don't want to be around her because all she does is talk about it and get angry.  But to Haven, it seems like no one wants to do anything about climate change and that if they don't there probably won't be a planet to live on by the time Haven grows up.  She's do something herself, but what can a twelve year-old possibly do?

Her science class is studying the local river -- a project undertaken every year by the science class -- and they start to notice things are different this year.  The usual resident bugs and insects are missing, the water's pH levels have grown noticeably more acidic since last year, and (most glaringly, in a waterway that was always teeming with amphibians) there are no longer any frogs!  Something is poisoning the river!  Haven suspects the new glass factory that moved in during the last year, but without proof, she can't start making accusations.  Still, Haven feels that she has to do something.  So, she organizes a community protest that brings attention to the problem.

A nice middle reader for young people who find all the grown-up discussion of climate change overwhelming.  I did not realize that "eco-anxiety" was an actual condition, but apparently it is, and I think Dee has done a nice job of providing a great role model for children who suffer from it.  It helps that Haven has lots of other middle school problems (changing friendships, changing gender relationships, self-confidence issues) that Dee slips into the narrative, to which readers will relate.  In the process of organizing her protest, she learns lots of valuable lessons.  While her anxiety is quite debilitating, her family and school are portrayed as supportive and nurturing and Haven deals with her issues proactively.  We never quite get to the root of her issue, but she starts to develop insights into the causes of it which will help her learn to cope in the end.

Students today are anxious about just about everything, so I wasn't surprised by the eco-anxiety. Dee's books are popular in my library, so this has circulated well. Thanks for your review!