I Shall Awaken, by Katerina Sardicka 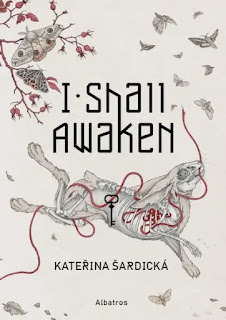 Twelve years ago, four children disappeared from their kindergarten.  Now, three of them have returned, with no memory of what happened to them or of what became of the fourth child.  The villagers in their small rural town are superstitious and the whole thing smells of witchcraft.  Mysterious animal deaths in the forest, combined with two suicides in the town start to direct people's eyes towards the returning children.  But underneath the accusations lie a twisted set of buried truths and secrets.

Translated from Czech, the story is rooted in Slavic mythology and has a strong Central European flavor to it.  The setting is timeless and, if it were not for a small number of modern references, it would be easy to imagine the story taking place in medieval (or at least pre-industrial) days.  It is in sum a Fairy Tale, in the Grimm's tradition with all the blood, gore, and brutality of which the original tales are full.  Characters (or even motivations) don't really matter as much as the jostling for power and control, and the long arm of fate directing everything.

It's not really the type of story I am drawn to, but if you like dark and primitive horror, this unique and well-styled book makes a good read.