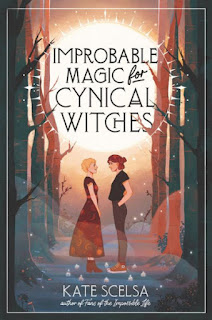 Eleanor has never quite understood the fascination with witchcraft in Salem.  To her, it's always seemed like a stupid way to get rich off of the tourists and she's treated her part-time job in a witch-themed gift shop with distaste.  However, it pays the bills which is an important thing when your Mom is largely immobilized at home suffering from long-term Lyme disease.  And the job also distracts her from the shame of what happened last year after her way-too-public breakup with her girlfriend -- a humiliation that she tries otherwise to deal with by self-medicating with lots of marijuana.

So, when she receives a strange homemade guide to tarot cards, she's pretty much ready to chuck it in the trash until the most beautiful girl she has ever seen walks in the store and starts talking tarot and witchcraft with her.  And suddenly Eleanor finds herself willing to embrace magic, witchcraft, or whatever else this girl Pixie wants.

Tarot cards never offer a definitive path or advice, but instead encourage a fair consideration of choices and alternatives.  Through an extended reading of most of the deck, Eleanor's full story unfolds (both what happened a year ago and the way that the current state mirrors and deviates from it).  And while the title promises some magic, this is more a story of healing, hope, and the faith to reopen a heart that has given up on love.

It's a charming story which cleverly uses tarot cards in a positive way to drive forward the plot.  Tarot cards (like Ouija boards) tend to get a bum rap as dramatic sources of evil, but Scelsa captures a more positive purpose as Eleanor comes to realize that her sufferings are really life lessons and her life is not pre-ordained but instead made up of forks in the road and a limitless opportunity for change.  The end result is a rewarding story of hope.

Note: The rather heavy use of drugs in the novel may disturb some adults, but it is an essential to the story, is not glamorized, and is ultimately resolved in a positive manner.