Remember Me, by Estelle Laure 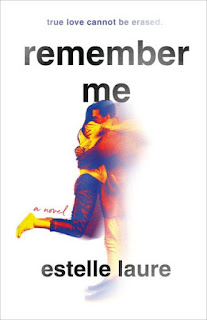 Blue finds a note that tells her to be on a certain bus at 7:45 on her birthday.  She might have ignored it, but she has a nagging feeling that it's important and something she should do.  She's been having lots of those strange feelings recently and a larger sense that she somehow is missing some big part of her life.  People around her are acting strange, talking about things behind her back (as well as insisting that she keep drinking orange juice!).

Riding on the bus, she is approached by a young man named Adam who explains that he's her boyfriend and has known her for years.  A far as Blue is concerns, she's never seen him before in her life.  However,  something about him does feels familiar.  He tries to explain what has happened:  she's undergone a procedure to "cancel" parts of her past, erasing all memories of certain key events and people (including him).

While she doesn't know what these presumably horrible things in her past are, she can't help feeling that this was a huge mistake.  Who would choose to forget one's past and the people who make it up?  That search for an explanation for the decision that she apparently made leads her to the doctor who performed the procedure.  It also causes her to cross paths with another doctor who is willing to undo the erasure of Blue's memories.  With that doctor's help, those memories are restored with traumatic results.

An interesting concept that is poorly developed.  Blue weak will and inability to cope with her emotions do not make a very compelling character.  But it is the disjointed nature of the novel that really caused me to lose interest.  The story itself is broken into two sections.  The first section provides the meatier stuff (the search for what happened, investigating the clues for an idea of why she made the decision, and the reaction of her friends and family to her attempts to uncover the truth).  It transitions abruptly into the second part where her memories are restored piecemeal through a series of flashback vignettes.  This is such an abrupt shift that Laure has to essentially write out all of the characters we've met in part one:  leaving Blue reliving her memories in a series of vignettes.  This piecemeal reconstruction is intended to add up to a tragic and ironic conclusion, but there isn't really much pathos there (with the possible exception of Blue's mother's behavior).  So, the inevitable conclusion (she gets her memories back and has to go on living her life with the "cancellation") doesn't deliver a pay off.